This post is in continuation to my previous post “Diseases of Apple: Apple Scab Description” here in this post I am discussing Apple Scab Disease Cycle.

Disease Cycle:
The fungus Venturia inaequalis causes apple scab, which is now endemic to all apple- growing countries of the world, is particularly severe in areas having high relative humidity and rainfall. 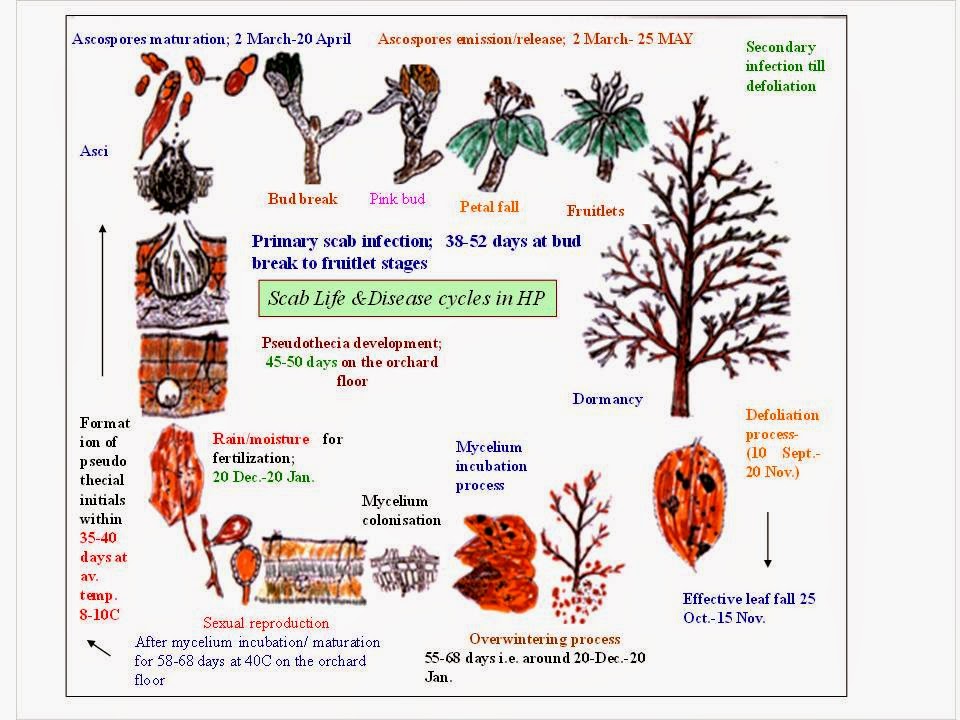 In winter, the scab fungus over-winters in infected leaves fallen to the ground.  During autumn, the fungus begins to form tiny fruiting bodies, which are embedded in the leaves near the surface.  Sacs filled with the primary or spring spores of the fungus start to develop within the pseudothecia by late winter or early spring.  The ascospores continue to develop and mature as spring progresses.  A few spores are usually mature at the time of bud break (green tip), and maturity progresses slowly until about the tight cluster stage of blossom development.  After this time, the percentage of mature spores begins to increase rapidly whenever temperatures are favourable for tree growth.  Most ascospores have matured by the end of bloom. Mature ascospores are discharged into the air during periods of rain.  In daylight, discharge usually begins within 30 minutes after the start of the rain and is largely completed within 3 to 6 hours.  When rainfall begins at night, discharge is often delayed until daybreak, although significant night discharge can occur under some conditions.  The number of spores discharged during any one rain is determined by both the size of the potential ascospore "crop" for the season (how many leaves were infected the previous year) and the percentage of these spores that have matured since the last discharge.  Ascospore discharge usually peaks in the time from pink through bloom, and nearly all ascospores are discharged within 1 or 2 weeks after petal fall.
Ascospores are blown to nearby trees by wind currents, and they germinate in a film of water on the surface of leaves and fruit.  If surface wetness continues long enough at prevailing temperatures, growth from the germinated spore penetrates and infects the organs just beneath the outer cuticle.  Typical lesions, each bearing tens of thousands of secondary or summer spores, appear about 9 to 17 days later depending on temperature, although long periods of low humidity can delay their development.  Conidia are dispersed by splashing rain throughout the rest of the season and are capable of causing new infections.  This is due to numerous additional conidia are produced on each new lesion, repeated secondary infections have snowball or epidemic effect on disease development.
Incidence of infection is affected by the age of leaves and fruit; young leaves generally are most susceptible 1 to 5 days after unfolding and become completely resistant from the time they finish expanding until shortly before leaf drop in the autumn.  Fruit are highly susceptible until about 3 to 4 weeks after petal fall, but much longer wetting periods are required for infection to occur after this time.  Precise requirements for infection of mature fruit are not known, but limited data indicate that wetting periods must last at least 48 hours for significant infection to occur immediately before harvest.
This fungus over winters on infected leaves on the floor of the orchard. Spores are produced on these dead leaves at about the time new growth first appears in the spring. Spores are discharged during rainy periods and lodged on young leaves. If the trees are wet long enough for the spores to germinate, infection occurs. The infection originating from the over wintering stage is called primary scab. Infection depends on air temperature and continuous wetness of the plant surface. At a given temperature, the surface must be wet for a given number of hours.  The average temperatures listed in the table are calculated by averaging the hourly temperature during the wet period.  Research has shown that ascospore discharge is significantly reduced in darkness, i.e. only 5 per cent of the available ascospores will be discharged when wetness periods begin at night.  Whether this 5 percent ascospore number is significant depends upon disease pressure in particular orchard. For example if there is a large amount of over wintered inoculum, 5% of the total ascospore dose could cause severe disease problems.  However, under the disease pressure normally prevalent, the number of ascospores released at night can probably be disregarded.   When trees are dry for less than eight hours between showers, add together the periods they are wet in calculating the infection period. Spores produced on a primary scab lesion are responsible for secondary infections. Secondary infection can occur in 12 to 20 days.  Several microcomputer based disease forecasting systems incorporate the Mill's information. Apply sprays to control secondary scab if one or two primary scab lesions per tree are present.

In coming post I shall be discussing about Scab weather monitoring and forecasting
Posted by Dr Bhupesh Gupta at 7:33 PM