This post is a result of the comments received from Dr Kishore Khosla (Principal Scientist), my senior colleague from RHRTS, Kullu as I didn't cover this disease in blog and is one of the most important disease in the economy of apple. I am thankful to Dr Khosla for such a contribution and hope to receive corrections in future as well. His valuable suggestions will help me to write for the farmers of the state.

Though we were discussing about virus and viroid diseases in my previous post and we will be continuing on the topic again after completing series on this disease.

Description: Scab may occur on leaves, fruit, petioles, and green twigs.  Infections of the leaves and fruit are most common and obvious. Early season infections usually occur on the underside of the blossom cluster leaves because these are the first tissue surfaces to emerge from buds in the spring. Once the cluster leaves have unfolded and terminal leaves begin to develop, infections become evident on the upper surface of the leaves. Individual infections appear as rough, circular, and brown to dark olive-green spots (lesions), which often appear slightly fuzzy or velvety in texture. Lesions along the veins or margins often cause affected areas to distort or crinkle. Primary (ascospore) infections are usually limited to one or two distinct spots per leaf, whereas secondary (conidia) infections are often much more numerous. Secondary infections occasionally are so numerous that the entire surface of the leaf appears covered with scab, a condition commonly referred to as sheet scab. 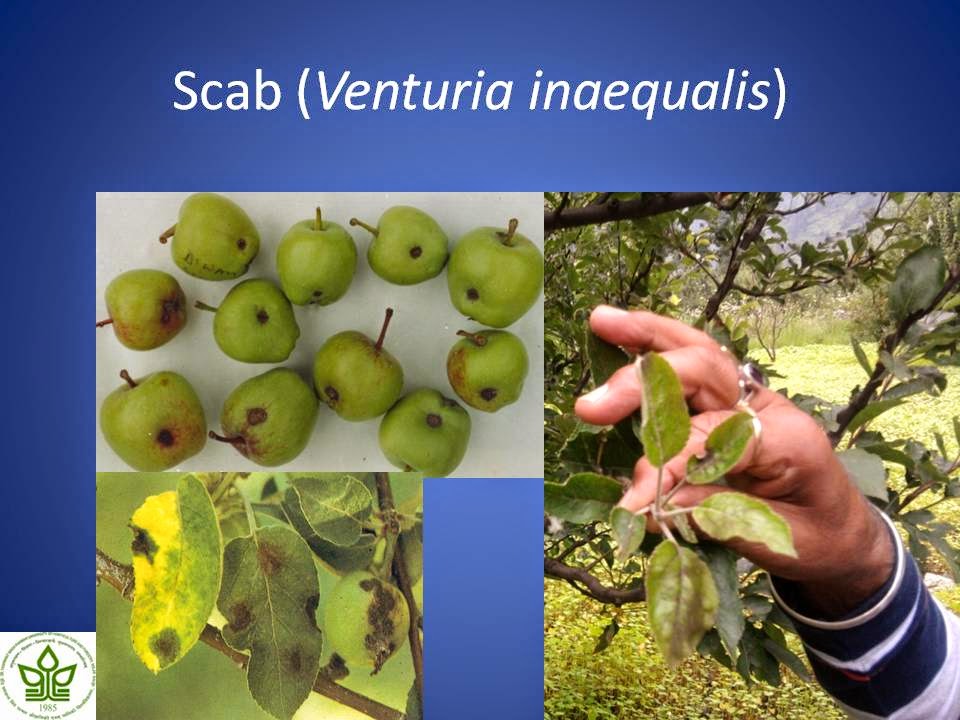 Lesions on young fruits initially resemble those on leaves but turn dark brown to black and become corky or scab-like with time. Cells near lesions on young fruit may be killed, causing these regions to become deformed or cracked as they fail to grow and expand along with the remainder of the apple. Primary infections are usually limited to one or two distinct spots per fruit, often near the blossom end because it is upturned during the early stages of fruit development. Secondary infections are more frequent and numerous and the spots may be clumped or grown together, particularly if the fruit is directly beneath a concentrated source of secondary spores such as an infected leaf.  Secondary infections that occur in late summer or early fall are often numerous and relatively small in size, a symptom referred to as pinpoint scab.  Infections that occur just before harvest may be symptom-less at picking yet develop into storage scab lesions after harvest.

In coming post I shall be discussing about the Scab Disease Cycle
Posted by Dr Bhupesh Gupta at 11:39 PM