This is in continuation to my previous post on Diseases of apple: Disease Cycle of Premature Leaf Fall. In today’s post we are going to discuss about the Disease Monitoring System for farmers.

The fungus overwinters in the form of apothecia on fallen leaves. Primary infection is caused by ascospores produced on the overwintered leaves. The ascospores discharge begins during spring season but causes infection at a particular leaf age stage.

During first one month after full bloom when temperature generally hovers around 20oC, but humidity is low therefore, leaves are not vulnerable to the infection.

It’s the first fortnight of June when temperature starts rising fast, pre-monsoon showers adds to the humidity in the orchards of shady areas. The infection initiates during this period rapidly and got established in 4-22 days (incubation period).

During second fortnight of June and July the symptoms begin with the response of the host. Less moisture, high humidity/foggy and temperature >20oC initiate blotch and yellowing. Infection near to leaf petiole site initiates early defoliation.

From first week of August onwards when rains recede but temperature remains above 20oC and humidity is above 90 percent, severity of the disease increases to epidemic level. During this period daily prevailing weather like light rains, partially sunny and foggy could predict the most suitable epidemic conditions.

In coming post we shall be discussing about the Management of Premature Leaf Fall disease of apple.

Posted by Dr Bhupesh Gupta at 5:22 PM No comments:

The fungus overwinters in the form of apothecia on fallen leaves. Primary infection is caused by ascospores produced on the overwintered leaves. The ascospores discharge begins during spring season but causes infection at a particular leaf age stage. The disease first attacks plants growing in shady and high moisture conditions

Air temperature, light intensity and soil moisture are the predisposing factors to trigger the disease outbreak, however, severity index increases with the maturity of the leaves.  The disease is severe when a cool, rainy period of 4 to 5 days proceeds several hot sunny days in the orchard. The inoculum of the disease get released at the pink bud stage but it causes the infection only at a particular leaf maturity stage when plant physiological processes start producing ethylene, the ripening / ageing hormone. The pathogen therewith the hormonal changes induce yellowing and abscission of the leaves and defoliation occurs.

The scientists have developed disease cycle key on the rate of infection conditions for this new disease on apple plant to monitor it. It therefore concludes that the blotch started its symptoms on the upper side of the leaf first in the 2nd week of June irrespective of the weather conditions. However, the disease symptom on leaves followed by temperature above 20oC and relative humidity above 70 per cent continuously for 5-6 days, induce yellowing and defoliation process. Prolonged hot and dry weather affect the primary infection and disease conditions adversely. Under favourable weather conditions the leaves start defoliation within 3-5 days whereas under interrupted/un-favourable conditions the infected leaves could retain up to 3 months.

In coming post we shall be discussing about the disease monitoring system for farmers.
Posted by Dr Bhupesh Gupta at 8:49 PM No comments:

This is in continuation to my previous post on Diseases of apple: White root rot Management. In today’s post we are going to discuss about the Premature Leaf Fall.

Description:  Pre mature defoliation in all apple-growing states of Himachal Pradesh, Jammu and Kashmir, Uttarakhand and North- east in recent years. The disease is caused by fungus, Marssonina coronaria and Alternaria mali resulting in mid-season pre mature defoliation. Its affects all the commercial cultivars grown in India.  Disease appears both on leaves and fruit. Dark brown patches having pin head fruiting structures, develop on upper surface of leaves varies from 5-10 mm diameter typical blotch symptoms. Various small and large blotches depending on the climatic conditions after the initiation of disease coalesce to form large dark brown blotches and the surrounding areas turn yellow. The yellowing advances towards petiole end, developing abscission layer and induce mid season defoliation. It reduces the fruit size and delays ripening. The fruits are poorly coloured and lack flavour. Irregular necrotic blotches on mature leaves characterize the disease. The blotches develop suddenly and increase rapidly during June-July (high humidity and high temperature) and cause yellowing and defoliation. The mid-season defoliation may be responsible for poor growth and development of fruiting buds and result into low productivity in ensuing year. Infection of the fruit appears in the harvested fruits and dark brown depressed spots are most common on ‘Golden Delicious’. 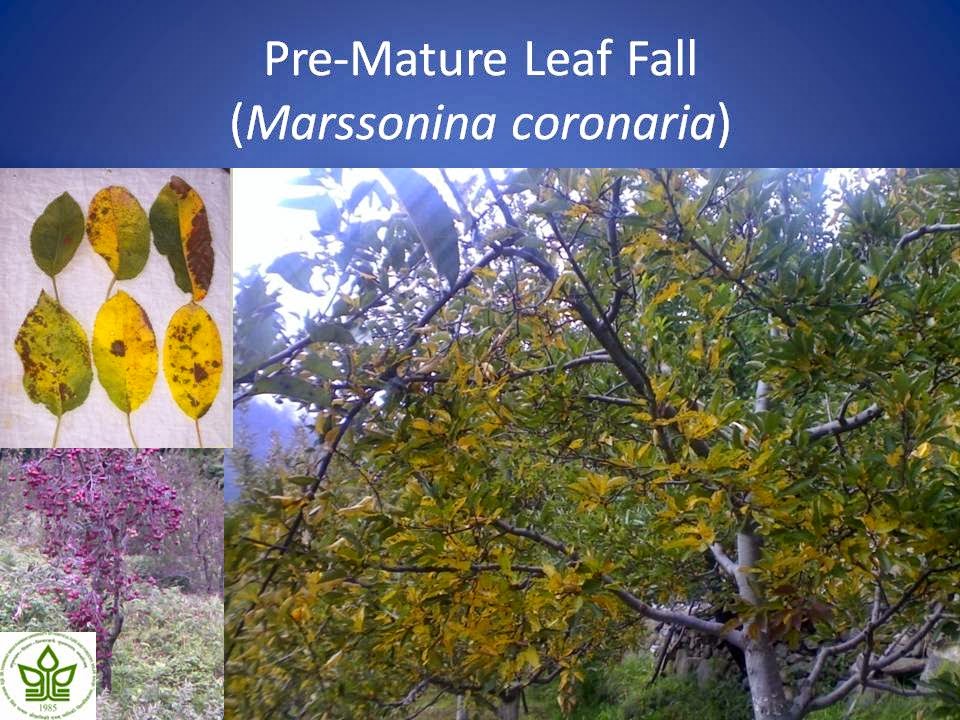 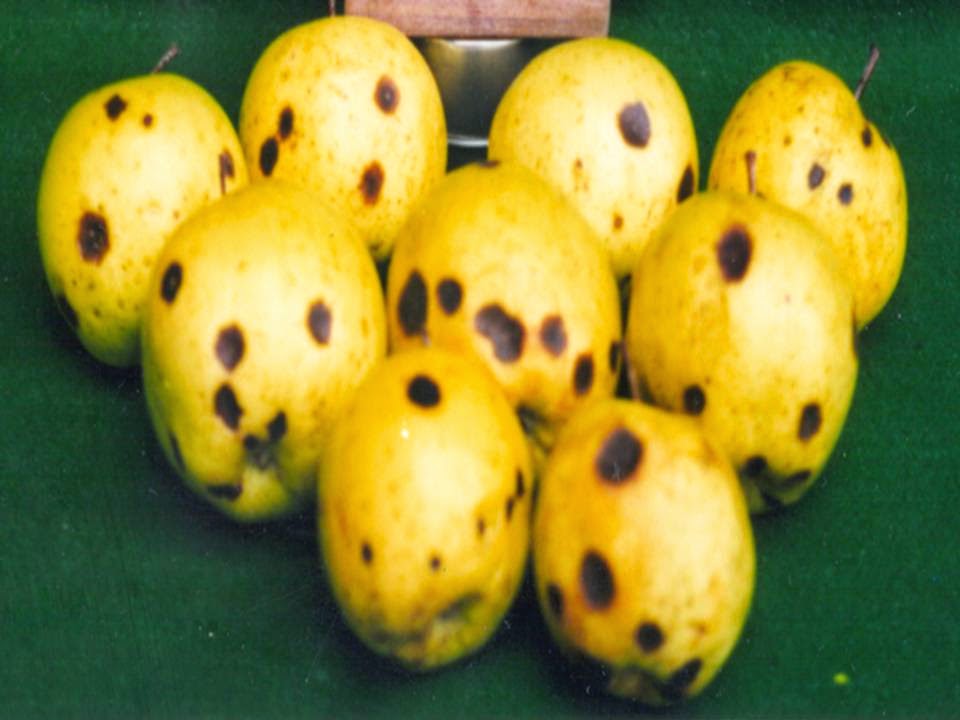 In coming post we shall be discussing about the disease cycle of premature leaf fall.
Posted by Dr Bhupesh Gupta at 8:39 PM No comments:

This is in continuation to my earlier post on Diseases of apple: White Root Rot Pre-Disposing Factors. This disease is generally appear in clay laom or loam soil having neutral pH. Mainly characterized by white thread like mats in the feeder root and bark that has rotten completely. Always get it diagnosed from an expert eye or one must consult some experienced farmers or a plant pathologist. Since it’s a soil borne disease, it should be managed in holistic way

1.     Phytosanitation: Free water or flood irrigation high moisture content in basin is major pre-disposing factors for the disease to spread. So keep the cultivation area free of diseased material like diseased bark and roots, etc. The cleanliness reduces the primary inoculum of the disease causing agents. This simple principle should be followed even if we don’t see primary symptoms. This is the best way to manage the diseases on small farms and helps in reducing the costs.

2.     Cultural Practices: Alter the environment in which disease is appearing i.e. high moisture level in the basin and nearby trunk. Improve drainage from the basin area. The basin area should be enriched with organic matter in the form of FYM or vermicompost, mulching with dry grass etc. This helps in building up saprophytes that in-turn act as biological control agents. These practices remove the primary inoculum as well as modify the environment for disease proliferation again without enhancing the cost to a greater level.

3.     Biological Control: Introduction of biological control agents in the soil is always being a good idea. Trichoderma viride, and its variants help the plant in fighting with plant pathogen and grow healthy with a little cost. If consortium of different soil inhabiting biocontrol agents is available it will help better in managing the disease.

4.     Chemical Control: Agrochemicals should be the last priority to manage the disease and that too after the proper diagnosis. As the application of a wrong chemical will not only worsen the situation but also pollute the soil and soil microflora. i.e. soil health. In turn increase the cost without preventing the damage caused by the insect-pests or disease. Since the disease caused by Dematophora necatrix this can easily be checked by carbendazim.

In my coming post I shall be discussing about pre-mature leaf fall of apple.

Posted by Dr Bhupesh Gupta at 7:23 AM No comments:

This is in continuation to my previous post on Diseases of apple: White root rot. In today’s post we are going to discuss about the pre-disposing factors for the disease development.

Soil moisture is the major key factor for the proliferation of the disease as the fungus is of polyphagous. The mycelium could grow in soils with 6-89.2 percent water content, but the fungal mats developed most vigorously at 70 percent. Soil type influences greatly the period of survival and spread of soil-borne fungi. The occurrence of white root rot disease of apple trees was closely related to soil conditions. In alluvial areas and regions with non-volcanic ash soils, the pathogen was associated with sandy soils over gravel where available water was the limiting factor. In upland regions, the disease was prevalent on shallow soils overlying stony sub-soils. Of the several factors examined in Himachal Pradesh for their possible role in the longevity and survival of the root rot pathogen, clay loam soil was reported better than clay soil for its longer survival at all temperature ranges and soil moisture regimes. Temperature has been known to play an important role in the survival and spread of the pathogen, 17oC is an optimum temperature level. Of the two factors i.e. temperature and soil moisture, the latter plays more decisive role in increasing the longevity of the pathogen than the former.

The prevalence of white root rot in Himachal Pradesh is limited to high hill soil texture varies from loam to clay loam. The soil reaction is slightly acidic and this zone is ideally suited for apple cultivation. It receives an average of 100-140 cm rainfall per annum. The rainy season in the apple zone is during June to September, when also a higher incidence and severe symptoms of root rot are observed, indicating that the disease spread and severity are related to excessive soil moisture regimes at higher temperature. The higher elevation range was observed favourable for the spread of D. necatrix being high rainfall area and low temperature conditions prevailing for long durations. Besides soil, pH also seems to have a strong relationship with the survival of the pathogen flourishing best in 6- 6.5 pH range. Incidentally the larger area under apple cultivation in Himachal Pradesh also falls within this pH range.

In coming post we shall be discussing about the management of the white root rot disease.

Posted by Dr Bhupesh Gupta at 3:36 PM No comments:

This is in continution of my previous post on Diseases of Apple: Collar Rot Management. By now you know about the collar rot symptoms and its managment practices. But a small description about white root rot here will help you distinguish between the two.  White root rot is taking heavy toll in wet temperate zone of Himachal Pradesh, besides fallacy in the diagnose is further making the situation worse. It is important to understand the disease symptoms and how to distinguish the intermingling symptoms. The description on white root rot is given below

White root rot as name indicates the white fluffy growth of mycelium can be seen on roots during monsson months this mycelial mat can be seen on soil level. The disease caused by Dematophora necatrix, a polyphagus fungus that can infect more than 173 plant species. The fungus has been increasingly imposing problem and resulting in the death of plants. Further, death of a tree, due to root rot in an orchard does not mean the end of losses, instead the incitant being soil borne also spread to neighbouring sites. The economic losses, therefore, are likely to multiply in compound manner within and outside the infected orchards. 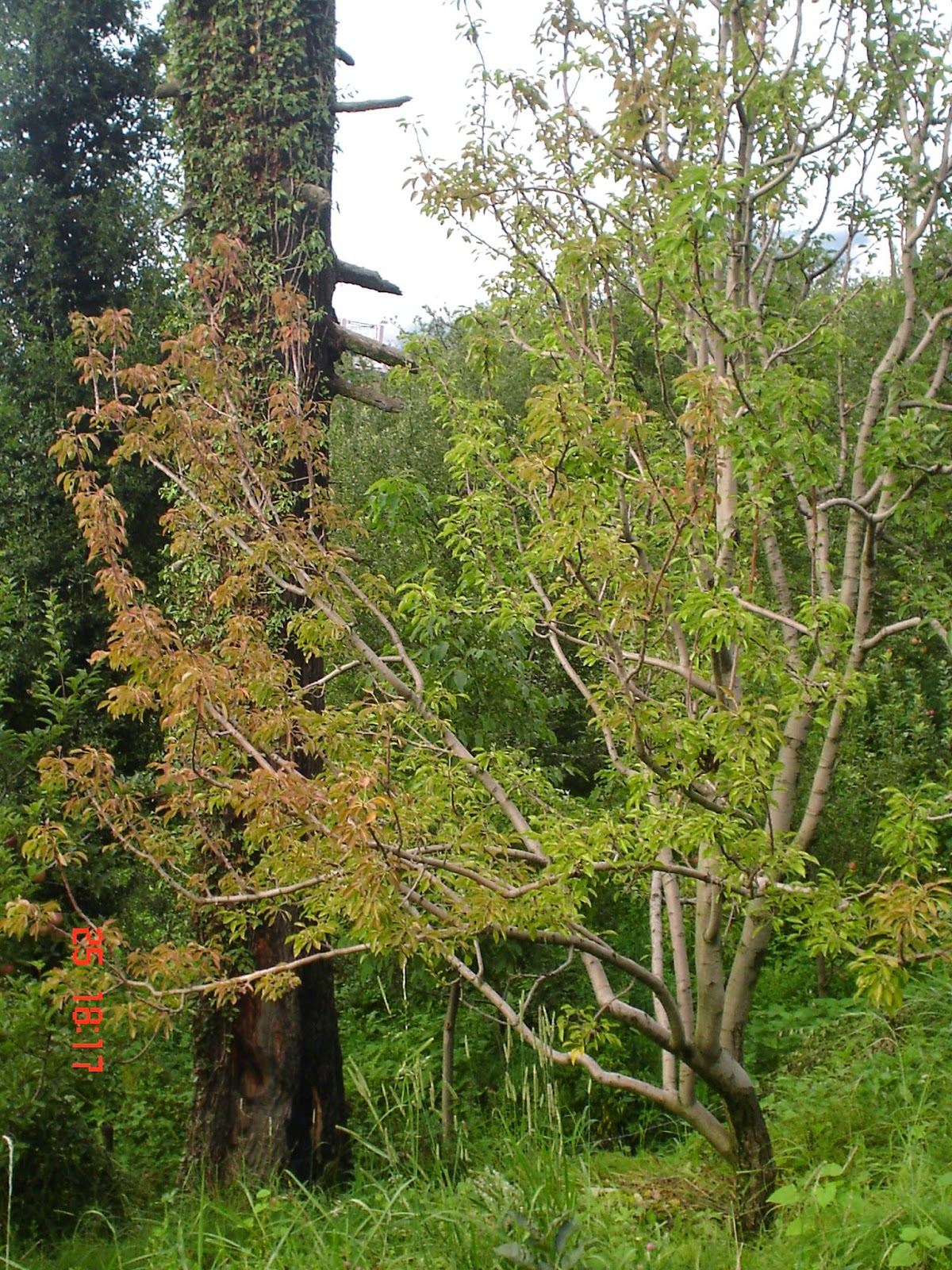 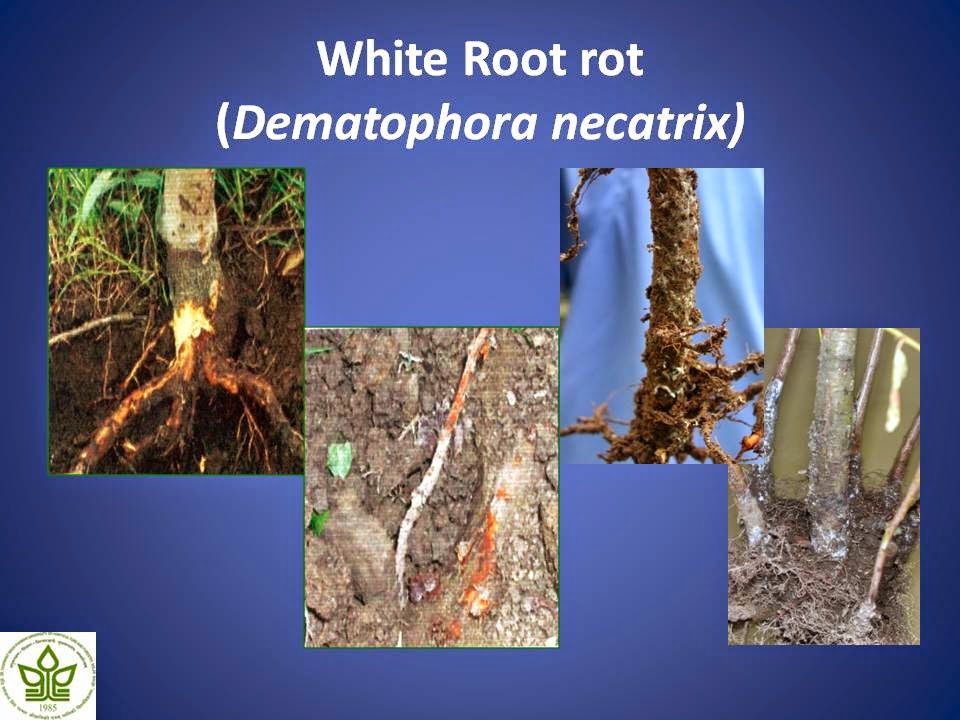 The fungus first invades feeder roots and disease symptoms can be ascertained on lateral roots, which turn into dark brown colour and become infested with white flocculent fungus during monsoon months. The earliest above ground manifestation of the disease is bronzing of the leaves, stunted growth and size. There is progressive decline in foliage and twig growth. White root rot affected trees are usually associated with a heavy weak blossom and fruiting next year, however in succeeding years, few leaves emerge and much of the immature fruits induce early colouration and fail to reach maturity. Severity in years leads to die-back/drying of twigs and branches. Fibrous roots are completely devoured in advance stage, and the tree dies as cortical and phloem cells are ruptured, which disrupt the translocatory system. Infected trees often persist for 2-3 years depending upon the infestation of the fungus and young trees if infested may die quickly with necrotic leaves still on the dead plant is a characteristic symptom.

In coming post I shall be dealing with the predisposing factors of the disease.
Posted by Dr Bhupesh Gupta at 11:02 AM No comments: