I discussed about Trichoderma with respect to its role in plant health management. In my previous posts I have discussed about low productivity in apple especially in our perspective. This low productivity in Himachal is because of many reasons discussed in previous posts that are to be dealt with technological back up. This requires lot of motivation of the farmers to adopt high density plantation on clonal rootstock but with this there is a great need for the technologocal backstoping. My core feeling is that what ever we are producing is not enough since if we check out the production data of our state it is hardly touching 11 T per hectare that too once or twice in the histroy of apple production but if we check out the average then it is hardly 4.5 T per hectare. Whereas countries like NewZea Land and Italy producing fruit to a tune of 40 T per hectare this makes us to review our strategies and to findout the way to increase our production. There are some farmers who are doing a very good Job in this regard they are trying to develop there own system to keep pace with the industry of apple production among these I must mention here that Mr. Vikram Singh Rawat in Karsog Valley is putting all his efforts to produce the trees on clonal rootstocks further he is putting lot of efforts in bringing the farmers under the umbrella of organic farming and high density plantation. In this series I feel that it is important to mention the name of Mr. Rajesh Thakur of Mahog, Mr. Rajender Kaushal of Chamanpur, Mr. Arun Bansal of Ruhni, Mr. Diljeet Singh Ghumman of Bakhrot, besides Mr. Dinesh Primta of Chaupal area, Mr. Neetu Dharma of Kotgarh and Rajender Chauhan of Kotkhai are the one those are working hard to make this high density apple plantation a reallity. This is a list where I know these farmers either personnaly or through my close connections. Many other farmers involved in the high density plantation this situation warrents us that we must put our steps forward to support these farmers in achieving their endeavours. That was the reason to bring out this topic ahead of disease and pest management in apple that was in planning well before persuing this blog.

In this blog I shall first cover the advantages of small trees these are as follows: 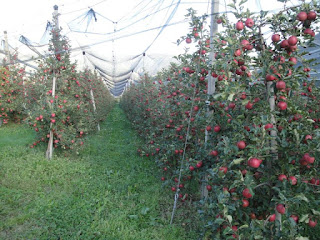 1.    Reduce pruning costs
2.    Less spray per unit fruit
3.    Better spray coverage
4.    Smaller, less expensive equipment
5.    Quicker fruiting
6.    Lower harvesting costs (no ladders)
7.    Labour prefers smaller trees
8.    Easier to mechanize
After looking on these let us see how many of farmers are getting motivation...............
In coming posts I shall be dealing with the Various rootstocks and scions that can be used in high density apple plantations
Posted by Dr Bhupesh Gupta at 11:18 AM No comments:

This post is in continuation to Siderphore production by Trichoderma: A Magicalplant health manager

Apart from the direct inhibition of plant pathogens, Trichoderma spp. are reported to improve crop health by promotion of plant growth (both root an shoot). It is reported to enhance growth in a number of plant species like rice, wheat, sorghum, tomato, brinjal, soybean, chickpea, pea, rajma, chilli, capsicum, apple etc. However, this growth promotary effect was not only dependent on isolate of Trichoderma but also on plant species cultivar involved.

Plant growth promotion is one of the indirect mechanisms employed by Trichoderma spp. which plays a role in the biocontrol of various plant pathogens and in improvement of plant health. Treatment with Trichoderma generally increases root and shoot growth, reduces the activity of deleterious microorganisms in the rhizosphere of plants and improves the nutrient status of the plant.  Growth enhancement by Trichoderma spp. has been observed even in the absence of any detectable disease and in sterile soil and is not considered to be a side effect of suppression of disease or minor plant pathogens.  Secretion of hormone-like metabolites and release of nutrients from soil or organic matter, have been proposed as the mechanisms involved in plant growth promotion. Trichoderma harzianum is good solubilizer of phosphorus but different strains show wide variation in their ability to solubilize phosphorus. T. harzianum was also reported to solubilize MnO2, metallic zinc, and rock phosphate (mostly calcium phosphate) in a liquid sucrose-yeast extract medium. Trichoderma produced chelating metabolites and used redox activity for solubilizing the minerals. Both of these mechanisms also play a role in biocontrol of plant pathogens, and they may be part of a multiple-component action exerted by Trichoderma to achieve effective biocontrol under a variety of environmental conditions. It has observed that seed treatment of corn with T. harzianum, planted in low nitrogen soil resulted in plants that were greener and larger in the early part of the growing season. An increase in the microelement content (viz. Cu, P, Fe, Zn, Mn and Na) of plants was also observed.

In coming posts I shall be discussing on Apple production with respect to future perspective in Himachal Pradesh and High Density Plantation.
Posted by Dr Bhupesh Gupta at 6:25 AM No comments: